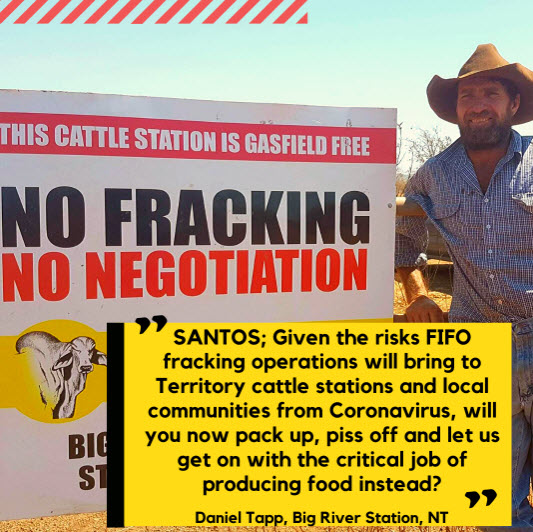 Territory pastoralists and Native Title holders have welcomed Santos’ announcement that it will abandon its exploration and fracking program for the McArthur Basin “beyond 2020”.

Speaking at the company’s online annual general meeting today, chair Keith Spence cited a combination of delayed drilling activities in 2019 and the Covid-19 situation for the decision.

The announcement comes after fellow fracking companies Origin Energy and Empire Energy recently announced they would indefinitely halt drilling operations in the NT.

Indigenous landholders in the region who have long contested the company’s claims of Indigenous consent for its activities, and whose communities are at increased risk from the spread of Covid-19, welcomed the move.

Estelle Fararr, an Aboriginal elder from Roper Valley whose homelands are covered by Santos’ exploration permits near Tanumbirini Station said, “We never wanted this gas fracking to come to our homelands in the first place. Now that the company has said they will be leaving we are very happy. We want to tell Santos not to come back, respect our people and our country. It’s not yours to frack.”

Territory pastoralist Daniel Tapp, whose station in the Roper region is blanketed by a Santos gas exploration permit, also welcomed the decision.

Mr Tapp was part of a contingent of landholders that issued questions at today’s AGM about the future of the company’s fracking plans.

Mr Tapp said, “Santos knows it does not have proper consent for its fracking activities from Territory landholders including pastoralists and Indigenous Traditional Owners.”

“While we welcome the decision today to pause activities beyond 2020, the company should now have the decency to give landholders certainty by packing up, pissing off and relinquishing its remaining exploration permits so we can get on with managing our land and livelihoods without the threat of dangerous fracking.”