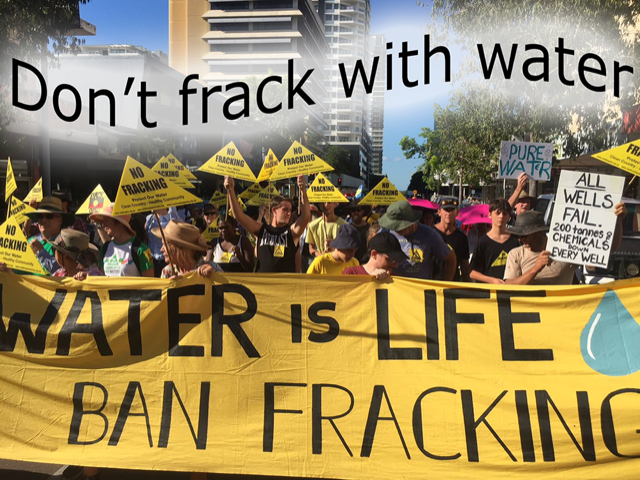 Concerns about the impact of Fracking on water systems are one of the biggest community concerns relating to Fracking.  It is essential that Fracking does not proceed until a full understanding of possible impacts on water quality, flows and potential disruption to springs and aquifers is understood.  The consequences of polluting waterways or significantly altering flows can be very far reaching and can impact long into the future.

There are concerns about both short-term water use as Fracking requires very large volumes of water.  This puts other users at risk and also reduces important environmental flows. Contamination issues and long term fears about loss of water quality and flow reductions leading to degraded water systems are major concerns.  This relates both to material that is released from the rocks that are broken apart during fracking as well as compounds injected into the fracking wells as a part of the Fracking process.

The SREBA has not been completed and will take at least 3-5 years.  Then, according to the Pepper inquiry report page 39, a final risk assessment is to be undertaken.

The handling and long-term storage of “flow back” water is a huge concern with no answers currently. Of the water and chemicals injected into the wells during fracking process around 70% returns to the surface.  This contains many pollutants including heavy metals and salts released from the rocks and may be radioactive. It also contains chemicals injected to facilitate fracking. These major issues have no reasonable solution and increase the costs of fracking gas to a point where it is not viable, unless corners are cut and these increased risks remain unmitigated.

These issues relating to water system integrity is a major concern for indigenous groups who have very special cultural bonds with water and water stories and take a very long-term view in relation to consequences of any actions. Parts of the water story trails through country are sacred. Indigenous people need to be given the opportunity to develop a full and informed understanding of the issues before being asked for their consent. This has not happened to date and indigenous people are feeling very anxious and threatened by this.

Water issues also threaten other industries in agriculture, tourism and fisheries. Escape of pollutants into aquifers will be catastrophic and long term. The PFAS situation around Katherine is but a small example.

Fracking is too risky as it is going to leave a huge legacy cost for future generations who will have to deal with on-going water  problems and crippling remediation costs. Indigenous groups carry an overwhelming burden of risk.