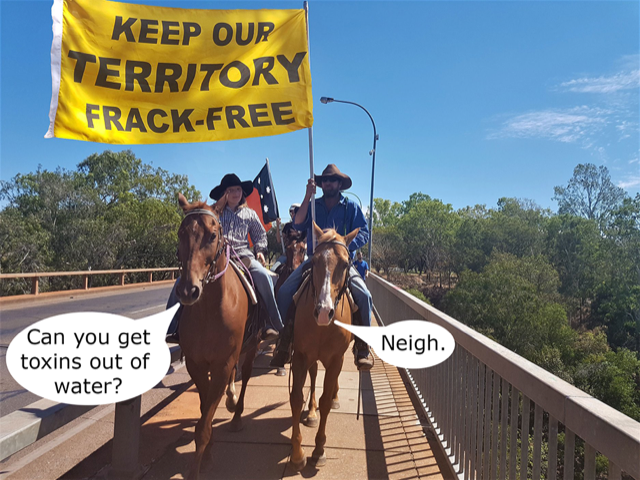 The Pepper Inquiry has concluded that there is insufficient information to permit a full assessment of the risks to groundwater resources from any shale gas industry established in the Beetaloo Sub-basin. Accordingly, the Panel has recommended that a strategic regional environmental and baseline assessment (SREBA) be undertaken to provide more detailed information on the groundwater resources before any further production approvals are granted for any onshore shale gas activities. As it stands we do not know if fracking can be done safely, what the impacts will be and what long term consequences might eventuate and yet the NTG and the Fracking companies seem to all assume fracking will proceed.

The water systems under the Beetaloo area include extensive Karst systems in old limestone deposits meaning pollution will not be constrained to the area of the well.

Time scale is vitally important here. There is no value in the Pepper inquiry focusing on well integrity for 10 years or even 20 years. If the wells fail in 40 or 50 years then the community will have to bear the damage or clean up costs if these are possible. (note example on p9 from the Perdika basin)   There are lots on chemicals and unknowns in the fracking fluids and the flow back water.  Think about the PFAS issue in Katherine, how do you fix an aquifer?  As an example the authorities in Pennsylvannia are trying to deal with significant leakage of wells.1

An industry paper in Oilfield Review 2003 (5.5), published by Schlumberger, one of the world’s largest companies specializing in fracking, admitted about 5 per cent of wells leak immediately, 50 per cent leak after 15 years, and 60 percent leak after 30 years. In NT conditions all wells would appear to be likely to leak eventually because of acid water and sulphide reducing bacteria.

Well-integrity is of concern in the NT because some groundwater environments in the NT are naturally corrosive. An example of the effect of corrosive water on cementing and casing in the NT is provided by deep oil exploration wells (McDills and Dakota) drilled in the Perdika/Great Artesian Basin in the 1960s. (The Perdika Basin is one of the prospective unconventional shale gas areas of the NT). Now, some fifty years later, the steel casing has almost entirely corroded away, resulting in inter-aquifer contamination. This well required expensive rehabilitation works to stem artesian flow (Humphreys and Kunde, 2004). This single bore cost the Territory and Commonwealth Governments $500,000 to plug as the company responsible for the well was insolvent ( NT Branch of the International Association of Hydrogeologists submission to pepper Inquiry)

The Pepper inquiry pointed to examples of some of these water related issues such as Fracking causing methane contamination of drinking water in Pennsylvania:

Page 147: A highly quoted work on the topic of detection of methane contamination associated with shale gas wells was published by Osborn et al. in 2011, and was followed up by a publication by Jackson et al. in 2013. These studies show there was methane contamination of drinking water in aquifers overlying the Marcellus and Utica shale formations of north-eastern Pennsylvania and upstate New York that was associated with shale gas extraction. Specifically, the closer (within around 2 km) a drinking water well was to an active hydraulic fracturing operation, the higher the measured methane concentration compared with non-hydraulic fracturing locations.

Fracking for shale and tight gas is an extremely water-intensive practice. According to one UN report, a single frack operation on a shale gas well will use between 11 and 34 million litres of water, roughly 360 – 1100 truckloads2. However, in their submission to the NT Fracking Inquiry, Origin put forward a much higher water use figure, suggesting they will require 50 – 60 million litres of water per fractured gas well in the Beetaloo Sub-basin. Currently there is no public information about where this water is to come from or the implications of it being removed from the systems.

US studies have implicated shale gas in the contamination of groundwater with heavy metals, salts and gas13. Contamination can occur from well-casing failure due to corrosion, faulty construction or repeated fracturing. Data from one US state shows that 6-7% of new shale gas wells were faulty and leaking gas. After 20 years this failure rate may increase to 50%, as wells corrode and cement casings degrade.1 The US EPA undertook a multi-year study and found clear scientific evidence that hydraulic fracturing can impact drinking water resources. Cases of impacts were identified for all stages of the hydraulic fracturing water cycle and included contamination that made private drinking water wells unusable.2

Disposal of wastewater from unconventional gas operations is a serious problem and the explanation as to how this is going to occur is outstanding. In addition to drilling and fracking chemicals, wastewater can contain a range of naturally occurring contaminants from source rock17. Wastewater disposal methods pose a contamination risk to water and soils, whilst wastewater reinjection has been linked to increased seismicity and earthquakes.18

From a local government perspective this has been a source of trouble with fracking operators seeking to dump their waste in local government areas.  This has been highlighted by AGL in the Glouster Newcastle area5 and in the Stockyard creek case in QLD where 15 million tonnes of salt waste are being dumped 150m from the creek.6

Growing evidence from the US shows that regulations are not capable of preventing harm in this industry. The number of wells and infrastructure keeps increasing. Point-sources of possible pollution are so many. It is not possible to properly monitor and enforce regulatory compliance for all of them. Plus, the outcomes of fracking operations are simply not always controllable. Monitoring unconventional gas extraction is high cost. In both the east coast CSG industry and the US unconventional gas industry, it has often been left up to impacted landholders and communities to monitor and report leaks and pollution. These factors mean that even in the presence of strong regulatory frameworks, the industry can still cause significant harm.  The June 2020 Grand Jury report from Pennsylvania showed these risks are very real problems with Fracking.