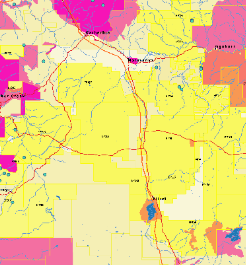 Worryingly, the government appears to have already approved some areas of the NT for fracking despite the ongoing public consultation period.

Regional baseline water and biodiversity studies the Pepper inquiry ordered are also not yet complete.

Protect Country Alliance spokesperson Graeme Sawyer said it was madness for the government to be considering sacrificing so much water and land to the industry, particularly with the Territory now struggling off the back of one of the driest wet seasons in history.

“Important sites of cultural and ecological significance like Lake Woods, a critical breeding site for dozens of threatened bird species including the Gouldian Finch, and the recharge zones of Mataranka thermal springs are also in danger according to the government’s plans.

“The catchment areas or flow rates for the Daly, Roper and Katherine Rivers which support important recreational fishing and tourism and provide the life blood to Mataranka, Katherine, the lower Daly and broader regional communities will be affected.

“Companies like Origin Energy and Santos are planning to start fracking as early as next month, but the government’s mapping leaves critical farming, fishing, tourism areas and natural and cultural assets under threat of gasfield development.”

“We are urging all Territorians, and all those who love the Territory, to let the NT Government know their no-go zones do not go far enough to protect the NT.”

“The no go zone is not very big around our water area in Tennant Creek. The bore is very close to the permissible fracking zones,” he said.

“Water security, tourism, and agribusiness in the region, worth hundreds of millions of dollars to the Territory's economy, relies on water from underground aquifers being sustainably managed.

“This will all be compromised should fracking be allowed to proceed as the government and companies intend.”

Alice Springs councilor Marli Banks said the drinking water supplies for Alice Springs and surrounding communities was at risk from exploration in the catchment area, as the water control district was not included for the no go zones.

“There is little consideration given to the scarcity of water in our arid region - there is a crossover with the current granted petroleum licences, as they overlap with the water control district ” she said.

“My understanding is that this district will be earmarked for fracking in the coming months and this puts our water at direct risk of contamination. It’s very concerning for locals.”

“The industrialisation of this region will also directly impact an already suffering tourism market, and could increase airfares for locals.

“We are also coming off one of our hottest summers on record, and encouraging industrial development that will increase global warming is not something that we should be doing.”

To have your say, head to https://www.protectcountrynt.org.au/no_go_zones.