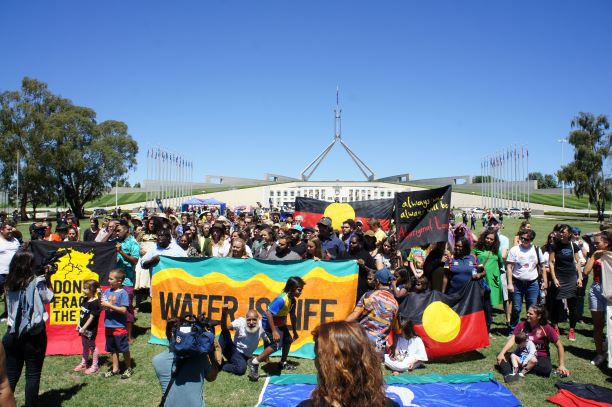 “Today was a historic moment of resistance led by Aboriginal and Torres Strait Islander people. People from across the continent came together to speak about the threats posed to our water, country and climate by extractive industries and the climate crisis,” Amelia Telford of the Seed Indigenous Youth Climate Network said.

Chants of “Always was, always will be Aboriginal land” and “Water is life, our land’s in strife” filled the halls of Parliament for over an hour on Wednesday morning, as First Nations people shared stories of the challenges their communities are facing and urgent need for action to protect country.

“We’re here bringing the mob from north, south, east and west together to push our message of protecting country. No matter where we come from, we’ve all been impacted by mining, the desecration of country, and loss of connection to culture,” speaker Dwayne Coulthard said today.

“As the first week of Parliament kicks off, we know this is not business as usual. We see fish washing up in our rivers, droughts, bushfires and floods - this is not normal. We’re not going to stand for it anymore - we’re going to stand together as First Nations people  and allies to say: enough is enough, Dwayne said.

Right now, water and our water rights as the original sovereign people of this continent are under greater threat than ever before from irreversible gas fracking & oil drilling, mining, forestry, overfishing, toxic chemical spills, industrial agriculture, cotton farming and the dangerous climate change that these extractive industries cause.

“Communities represented in today’s action are at the forefront of fights to stop fracking, protect water in regions like the Murray Darling, and keep coal in the ground. We have come to Parliament to demand that our rights, sovereignty and knowledge are respected,” Philip Winzer of the Warriors of the Aboriginal Resistance said today.

Bradley Farrar travelled from the Northern Territory to send a message at today’s action. “I’ve come to represent my people- and talk for my people and my land, and share knowledge with other countryman, brothers and sisters, so we can fight together for one force : to stop fracking, oil and mining from destroying our land,” Bradley said.

Thelma Dixon travelled with her family from Marlinja outstation 700kms south of Darwin to call for fracking to be banned in the Northern Territory.

“We are standing up and saying no to dangerous fracking that could poison our water and drive us off country. Water is life, and is so important to look after for local communities and future generations.” 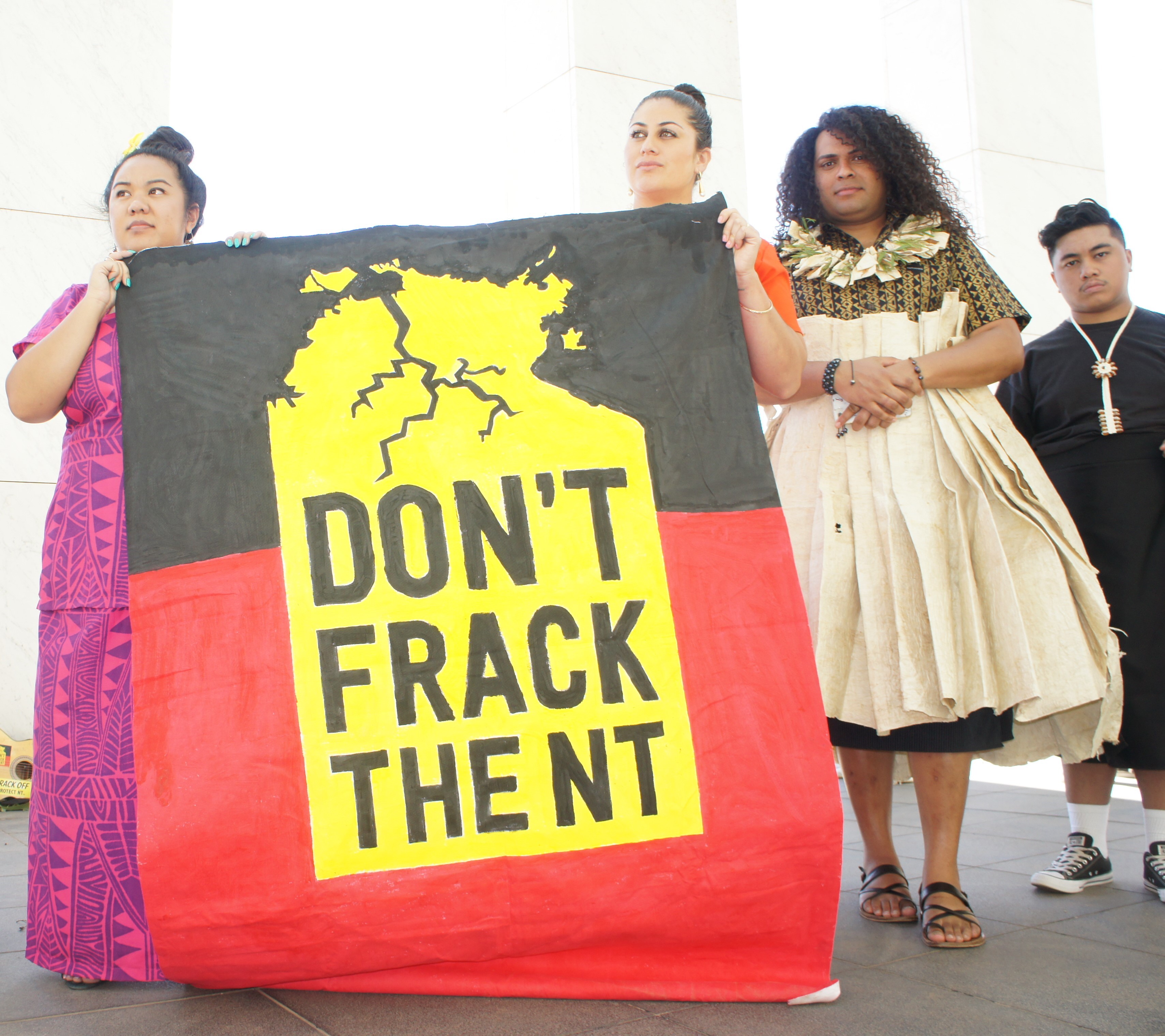 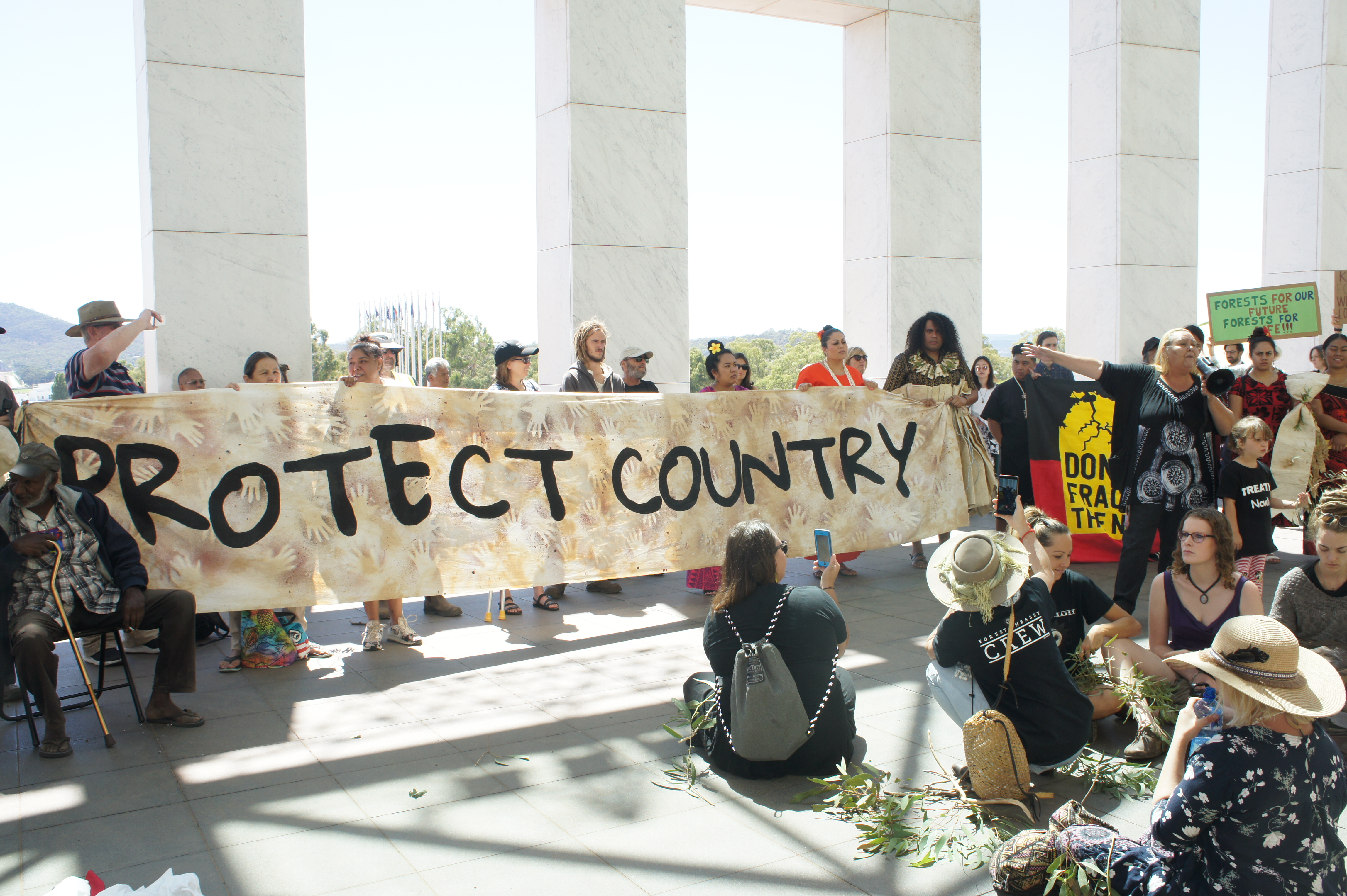