This page explains the issues relating to the NT Gov't failure to properly implement the groundwater monitoring regime as required by the Pepper Inquiry recommendation 7.11. This recommendation was seen by the Pepper inquiry as "essential" and was designed as "an early warning system" for leaks.  It was also supposed to be implemented "before any further exploration".

The monitoring regime requirements were for multi level sensor arrays with Electrical conductivity(EC)(a proxy measure for salinity) readings being recorded at each level of each bore and with the capacity to distinguish between the top, middle,and bottom of the bore column. A minimum of three sensors are needed to do this. See details below.

The data should be available online, and in real time for the community. (recommendation 7.11preamble)

This has not been done. Only data from bores at Tanumbirrini are visible.

The bores do not have multiple sensor arrays, only single sensors.

The raw data from RN090936 reveals  an approximately 50-fold increase change in the conductivity reading microsiemens/cm (μS/cm) which is a standard measure of total dissolved ion load/salinity in water, commonly used to track the salinity of freshwater. This is about twice the salinity of sea water.

Figure 1 Plot of the data from the monitoring well showing the average daily EC (salinity) readings.

The raw data (available for download via the point.nt.gov.au website) shows some very big changes which require explanation.  See figure 1 above. There is some manual monitoring data done by the Exploration company SANTOS which does not show the same salinity! That monitoring was done using a different method and at a different time. Specifically when the salinity spike occurred in late August 2019, the manual data was collected over a month later, using a different process.

If these salinity leaks, indicated by the data, continue then there are a number of catastrophic consequences likely to happen due to the salinity changing the nature of the beneficial groundwater to the point where they cannot be used for human consumption, irrigation, or for water for stock and biodiversity.

The monitoring bores should have had multiple sensors and they should all be providing a minimum of Electrical conductivity readings.  This was clearly explained in recommendation 7.11 and the NTG has repeatedly claimed, including in the Senate inquiry in Darwin Tuesday March 22, that this recommendation is completed.

The core of the problem is a single sensor can lead to doubt about the results.  The monitoring program should be implemented in a way to ensure problems do not impact on the data quality and that any data can be believed without question.

Whilst the sensor data seems to be flowing correctly with 6 readings a day from the sensor the fact that there is no supporting data from other sensors means some doubt can be created.  You can download the data from the websites listed below and check the readings.

The government and industry are trying to explain the spike in salinity as being caused by "sensor failure due to fouling".

It is here the fact that there were not 3 sensors really impacts.  If there had been 3 sensors there would be no question as it would be clear if the EC (salinity) increase was a spike or one sensor "failing"

We do not accept that the sensor failed due to fouling because these sensors typically do not show data like that from RN040936 if they are fouling and the evidence shows fouling was not ocurring.

The manufacturer technical support people indicate that the scenario in the data from RN040936 is not what happens when sensors of this type (Aquatroll 200) suffer from fouling.  The sensors read EC by measuring the time it takes for an electrical current to pass between two electrodes.  When fouling occurs it slows down the current flow and so the sensors typically read lower.

Firstly the senor continued to provide readings 6 times a day in a coherent sequence.

The way fouling sensors read data is supported by research from other organisations as shown in the graph below. 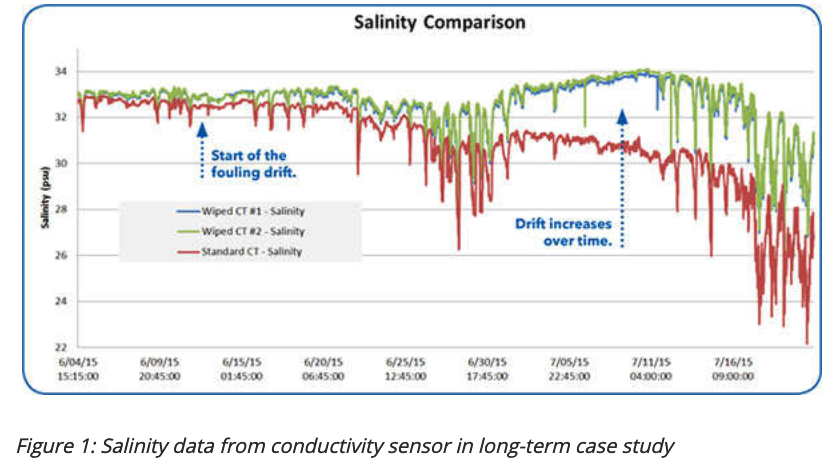 This graph above from the YSI research shows the red line, the data plot from a sensor that is fouling over time, changing whilst the green and blue lines plot data from 2 self-cleaning sensors that are not suffering from fouling.

This shows clearly that fouling reduces the measurement levels and that the process is gradual as the fouling increases.

This data also shows that while a sensor might be reading lower because of fouling it is still showing changes in EC. You can see this in the graph where the up and down changes in the blue and green plots are very closely matched in the red plot as well.  This suggests the spike in the Beetaloo did actually happen as a result of a salinity spike.

This is critical as the system in the Beetaloo is supposed to act as an early warning system for leaks and so major changes in readings are far more important than the actual reading numbers. The single sensor seems to have done what it was supposed to do, its just the goivernment and industry are trying to hide from the implications of a leak in the Beetaloo

The further claim that the sensors were suffering from fouling is  refuted by the raw data.

Further the raw data from RN040930 shows little change over the period from 10 December 2018 (reading 1664.7 (¬µS/cm)) until the August 28 EC increase in nearby RN040936 when the reading was 1671.2 ¬µS/cm.  The average reading across that time was 1653 ¬µS/cm from about 1047 readings.  This does not show that fouling was causing issues with the sensors, especially since their aim was to detect major changes in EC suggesting a possible leak.

Why was the concern about sensor drift accepted when the raw data from the sensors show no statistical evidence of what could be described as drift?

Why was the sensor not replaced until 15 Sept 2020 if it was thought to have failed in October 2019?

We had been repeatedly assured the monitoring was in place and now we find that not only was it not done properly but it has produced data indicating one of the worst nightmares, that of inter aquifer connectivity looks to have occurred.

The only explanations we have of this raw data are failure of the sensor or a leak.  Sensor failure is not supported by the ongoing readings in the data, nor is it supported by research into sensor performance or by the manufacturer. The raw data file shows six readings a day that indicate the sensor is working and changes have occurred in two separate bores, two separate sensors. ( see comments below by scientists in Appendix Anonymised expert opinions).

The scenario that does fit all the raw data is inter-aquifer connectivity where a saline aquifer has been "connected" to another freshwater aquifer. The data suggests that there has been a burst of saline water push into the aquifer where the bore is. That suggests the hypersaline system lower down in the Beetaloo basin has been “connected” to the monitored aquifer.

There are numerous salinity sources in the region that could do this. The Moroak sandstone and Jamison Sandstone layers are two, but other formations have saline content.  The Moroak has flowed to surface before and is hypersaline (at least 6 times saltier than the sea) overpressure at 1660 psi. The Kyalla and Jameson formations may also be a potential source but it is less certain they are overpressure.  Overpressure means the system can flow to the surface if provided with a pathway.

The monitoring data is now available from the NT Government POINT Website, or from the Water Portal

What must be done.

The minimum of 3 sensors per monitoring well must be implemented.

The data must be made available to the public

A ban on further fracking exploration activity until the monitoring bores are correctly set up.

An explanation of what notifications the Minister received and what actions were taken.

IF indeed the company SANTOS and the Government believed that the senor was failing why wasn't it replaced.

That prior to the grant of any further exploration approvals, in order to minimise the risk of groundwater contamination from leaky gas wells:
• all wells subject to hydraulic fracturing must be constructed to at least Category 9 (or equivalent) and tested to ensure well integrity before and after hydraulic fracturing, with the integrity test results certified by the regulator and publicly disclosed online;
• a minimum offset distance of at least 1 km between water supply bores and well pads must be adopted unless site-specific information of the kind described in Recommendation 7.8 is available to the contrary;
• where a well is hydraulically fractured, monitoring of groundwater be undertaken around each well pad to detect any groundwater contamination using multilevel observation bores to ensure full coverage of the horizon, of any aquifer(s) containing water of sufficient quality to be of value for environmental or consumptive use;
• all existing well pads are to be equipped with multilevel observation bores (as above);
• as a minimum, electrical conductivity data from each level of the monitor bore array should be measured and results electronically transmitted from the well pad site to the regulator as soon as they are available. The utility of continuous monitoring for other parameters should be reviewed every five years or as soon as advances in monitoring technology become commercially available; and
• other water quality indicators, as determined by the regulator, should be measured quarterly, with the results publicly disclosed online as soon as reasonably practical from the date of sampling. This monitoring regime should continue for three years and be reviewed for suitability by the regulator.