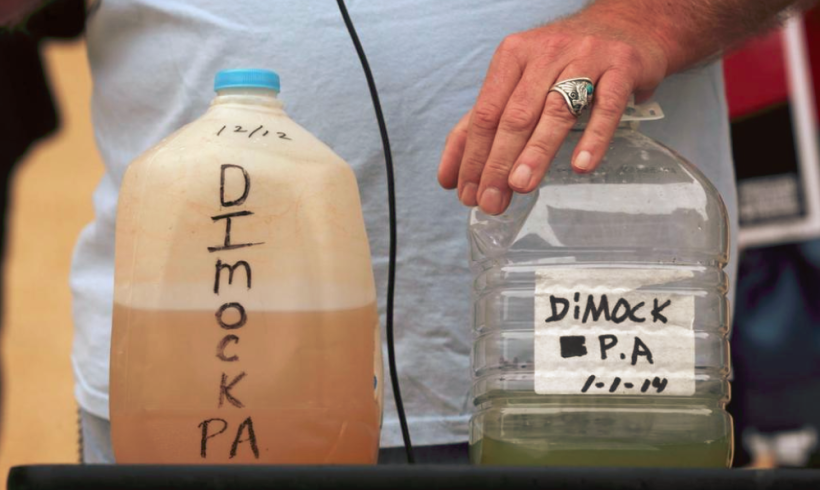 Frack-free NT has called out Mines and Energy Minister Vowles’ for an extraordinary waste of taxpayer funds as he returns from a tour US fracking sites. Spokesperson Lauren Mellor said evidence of fracking impacts from Pennsylvania and Texas show regulation has failed to prevent harm, and calls into question NT Government trip and expenditure.

Minister Vowles and an entourage returned today after touring regions of the USA last week. He claimed the trip’s purpose was to gain insight into ‘world’s best practice, and visit some of the most well-regulated sites in the industry’ for its application in the Northern Territory. The trip cost taxpayer’s more than $80,000.

Yet the tour’s stated aim is at odds with the findings of the Gunner Government’s own public inquiry into hydraulic fracturing, carried out at a cost of $5 million.

Frack-free NT’s Lauren Mellor has challenged the rationale for the trip: “Had the Mines and Energy Minister bothered to take note of its own commissioned research contained in the Pepper Inquiry, this expensive and unnecessary PR exercise could have been avoided.”

“The Pepper Inquiry documents the long and unenviable track record of both the Pennsylvania and Texas state governments in the regulatory mismanagement of fracking operations, including documented evidence of drinking water contamination, spills, leaks, health impacts, decreasing wellbore integrity and complaints by local communities.”

“If this experience is what the Gunner Government will be basing its fracking regulations on, Territorians should be alarmed. These are hardly examples that the Territory would want to follow. If this is world’s best practice regulation, then it shows that regulation is incapable of preventing harm.”

Further to the NT Fracking Inquiry references, there are numerous other government, science and news reports of negative impacts and regulatory failure in Pennsylvania and Texas. A detailed list can be found in the briefing paper attached.

a snapshot of impacts from Pennsylvania and Texas, USA.

The below are directly from NT Fracking Inquiry report with the page number.

Page 147: A highly quoted work on the topic of detection of methane contamination associated with shale gas wells was published by Osborn et al. in 2011, and was followed up by a publication by Jackson et al. in 2013. These studies show there was methane contamination of drinking water in aquifers overlying the Marcellus and Utica shale formations of north-eastern Pennsylvania and upstate New York that was associated with shale gas extraction. Specifically, the closer (within around 2 km) a drinking water well was to an active hydraulic fracturing operation, the higher the measured methane concentration compared with non-hydraulic fracturing locations.

Page 255: A number of published papers have addressed the potential public health impacts of volatile organic compounds (VOCs) and other airborne chemicals in dusts that may travel off-site. Much of the evidence linking airborne emissions with adverse human health effects is based on surveys and reviews of health effects relating to unconventional gas extraction from shale gasfields in the US, particularly around Pennsylvania, Texas and Colorado.

Page 258: In a review of 1.1 million birth records from Pennsylvania over the period 2004 to 2013, Currie et al. found that in utero exposure to fracking activities resulted in poorer infant health outcomes, including lower birth weight, and that the distance from these activities was again a crucial factor. The highest impacts were noted where mothers lived less than 1 km from fracking sites, with effects also noted at up to 3 km, although the effects, as measured by an infant health index, were quite variable between 2–4 km from hydraulic fracturing sites.

Negative impacts on agricultural jobs were measured in Pennsylvania:

Page 320: While there tends to be a net increase in employment, skill shortages can have a negative effect on pre-existing industries, particularly in agricultural regions. These effects were recognised in the Marcellus shale development in Pennsylvania in the US.

Setback distances from fracking were inadequate to protect public health in Texas and Pennsylvania:

Page 258: The issue of an appropriate distance for well heads and well pads to be ‘setback’ from human habitation was addressed by Haley et al. They analysed health risks associated with blowouts, thermal modelling and air pollution around three major shale plays (Barnett, Marcellus and Niobrara) in the context of relevant State regulations in respect of setback distances from buildings: 200 ft (61 m) in Texas; 500 ft (152 m) in Pennsylvania; and 500–1000 ft (152 m – 305 m) (high-occupancy dwellings) in Colorado. The overall conclusion of Haley et al. was that the setback distances analysed were inadequate to protect public health.

Methane emissions from abandoned gas wells in Pennsylvania can be significant:

Page 234: In another study, it was noted that poor cementing may result in well integrity failure and potential leaks. This is influenced by three main factors: failure to bring the cement top high enough; failure to surround the casing completely with cement; and gas migration in the cement during cement setting. Direct measurements of methane fluxes from 19 abandoned oil and gas wells in Pennsylvania were undertaken, with methane flow rates observed from all 19 wells and the mean well methane flow rate being 99 kg/y. The maximum flow rate from a well was 753 kg/y. Assuming the mean flow rate to be representative of all abandoned wells in Pennsylvania, it was estimated that the methane emissions from abandoned wells was 0.1–0.5 % of gross gas withdrawal in Pennsylvania. These measurements show that methane emissions from abandoned oil and gas wells can be significant.

Page 257: It is common for health impacts of unconventional gas extraction activities to be assessed by self-reporting questionnaires. For example, a questionnaire-based study of residents around unconventional gas extraction developments in Pennsylvania showed an apparent association of unconventional gas extraction with nasal and sinus symptoms, headache and symptoms of fatigue. While the overall response rate was low (only 7,785, or 33%, of 23,700 survey recipients) and only 23–25% of these respondents reported symptoms, the calculated odds ratios (OR) achieved statistical significance for some of the outcomes. These OR (95% Confidence Interval) of 1.49 (0.78, 2.83) for chronic rhinosinusitis (CRS) plus migraine; 1.95 (1.18, 3.21) CRS plus fatigue; 1.84 (1.08, 3.14), for all three outcomes, suggested an association, presumably related to airborne VOCs.

Page 315: The Academy of Medicine, Engineering and Science of Texas (TAMEST) also reported an order of magnitude increase in road traffic (not only trucks) and road accidents, as well as clearly observed degradation of roads and roadside infrastructure.

TAMEST also acknowledged that the level of funding allocated to address the impact on road infrastructure and traffic safety was low when compared to the magnitude of impact. This mirrors findings from Queensland where the upkeep and maintenance of roads over the longer term fell to local government.

Other Evidence from Pennsylvania and Texas

Further to the NT Fracking Inquiry references, there are numerous other government, science and news reports of negative impacts and regulatory failure in Pennsylvania and Texas.

Over 300 confirmed cases of drinking water contamination in Pennsylvania drilling and fracking according to Government:

The number of confirmed cases of water contamination determined by the Government to be caused by oil and gas activities in Pennsylvania is now over 300. See the updated list here: http://files.dep.state.pa.us/OilGas/BOGM/BOGMPortalFiles/OilGasReports/Determination_Letters/Regional_Determination_Letters.pdf

Health impacts from fracking were ignored by Pennsylvania Government

In Pennsylvania, retired Department of Health workers have alleged that they were told not to respond to community health complaints linked to drilling or fracking.

“Texas’ policy on reporting brine spills can be confusing. The RRC has specific requirements for reporting oil and condensate spills of five barrels or more. Companies must fill out a form, called an H-8, when such spills happen.

But there is no specific reporting requirement for reporting brine spills. The H-8 form excludes wastewater spills.

Even the requirements for notifying the agency about wastewater spills are murky.”

This links to 8 reports.

A Comprehensive Analysis of Groundwater Quality in The Barnett Shale Region
An analysis of 550 groundwater samples collected from private and public supply water wells drawing from aquifers overlying the Barnett shale formation of Texas. We detected multiple volatile organic carbon compounds throughout the region, including various alcohols, the BTEX family of compounds, and several chlorinated compounds. These data do not necessarily identify unconventional oil and gas activities as the source of contamination; however, they do provide a strong impetus for further monitoring and analysis of groundwater quality in this region as many of the compounds we detected are known to be associated with UOG techniques.

Scroll down for lots of info on complaints & poor regulations.

A County Resents Oil Drilling, Despite the Money It Brings In

Ingraffea AR. (2012) Fluid Migration Mechanisms Due To Faulty Well Design and / or Construction: an Overview and Recent Experiences in the Pennsylvania Marcellus Play. Physicians Scientists and Engineers for Healthy Energy. (Ingraffea 2012)