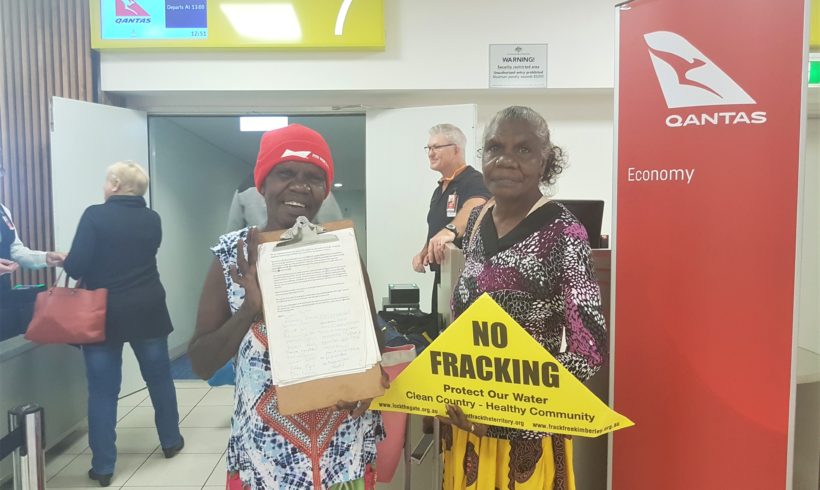 Traditional Owners, the Protect Country Alliance and supporters will address a press conference prior to the AGM, coinciding with the launch of a national campaign calling on Origin to drop plans to frack the Northern Territory.

The Traditional Owners will attend Origin’s AGM on Wednesday October 17th. They will present the company executive with signatures from hundreds of Traditional Owners from Origin permit areas saying Origin failed to adequately consult Traditional Owners on the scale and risks of its gasfield proposals, and that many were excluded from consultations entirely.

A resolution from the Australasian Centre for Corporate Responsibility (ACCR) backs these complaints. It calls on Origin to conduct a review on the adequacy of its consultation process for gas fracking permits in the NT, and to publicly report and act on the outcome of this review.

Large investment funds have been hearing from Traditional Owners in the lead up to the AGM about Origin’s consultation failures and concerns about fracking risks to water, communities and the climate.

Stuart Nuggett has travelled from the remote township of Elliott to attend the AGM on behalf of his community, a region at the heart of Origin’s fracking permit acreage:

“Our communities haven’t been given enough information about what Origin is planning for our region. We are worried about the risks fracking brings. I have concerns over what the impact could be on water. Water is life. I want the company to listen to our concerns and act on them.”

May August is an Alawa grandmother and Traditional Owner for land under the Origin exploration permits:

“We don’t want fracking to start in our area because we have seen the damage Origin and other companies have done elsewhere in Australia.”

“Our homelands are full of bush medicine plants which we harvest for our traditional medicine business, and we run cattle through a community enterprise. Our livelihood relies on lots of good country and clean fresh water, but all that is at risk if Origin forces fracking gasfields over the top of us.”

“This week we are going to speak to the bosses and shareholders at Origin and tell them to stop funding destruction of our homelands. If they don’t listen to us, then we will be speaking to Origin’s customers instead, and asking them to send Origin a strong message by refusing to buy from them.”

“Origin tell their customers they are a ‘good energy’ company but there is nothing good about polluting our air and huge volumes of water to produce dirty fracked gas.”