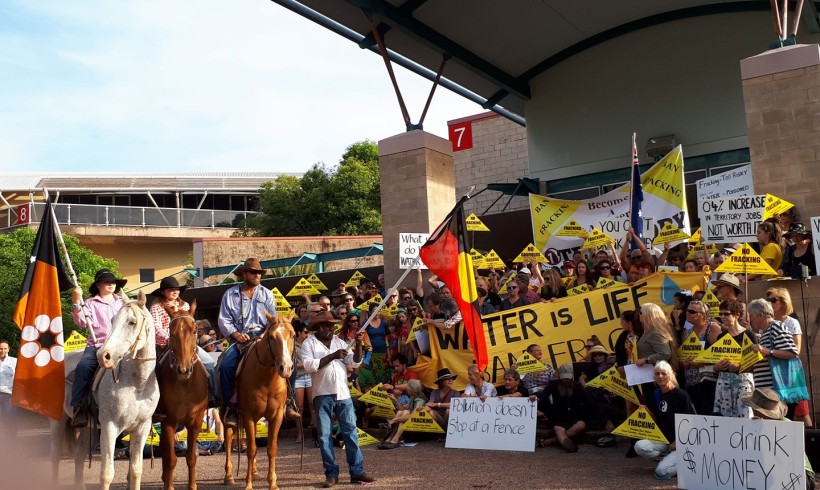 The resolution received majority support from the party’s elected members today in a move that contradicts a recent decision by Chief Minister Gunner to greenlight fracking over 51% of the Territory.

Lauren Mellor from Frack-free NT said: “Hundreds of Territorians including pastoralists and Traditional Owners from regions targeted for fracking gasfields fronted the Labor Conference today to demonstrate continued support for a fracking ban. We feel vindicated by this decision which shows the Chief Minister is isolated in his support for the fracking industry, even within his own party.”

“Communities have pledged to continue to campaign to ensure fracking is permanently banned across the Territory, and the support today from the NT Labor Party is a step in the right direction to reversing this disastrous policy and ensuring Territory voices are put ahead of gas fracking company profits.”

Casey Townsend from Hazard Station near Katherine told the crowd: Our farming jobs are on the line if fracking gasfields get the go-ahead on our stations and farms. Fracking gasfields in other regions have been shown to hurt regional economies and displace jobs in other sectors. We don’t want to see that fate for our sustainable industries like tourism, fishing and farming.”

“Out our way we’ve already seen the damage that reckless mining can do to our land and water. Our rivers and fishing tourism industry have been killed by mining companies and government regulatory failures. Water is life for our region and we are here to tell the government today that we will not accept any more risk to our water, land or livelihoods from fracking.”

Hundreds gathered outside the NT Labor Conference today at Charles Darwin University campus to call for a ban on fracking gasfields, and welcome representatives from remote communities who convoyed as part of the Convoy for Country on horseback to Darwin to bring the frack-free message to Labor Conference.

Over 500 unite in Darwin to protect NT from fracking gasfields 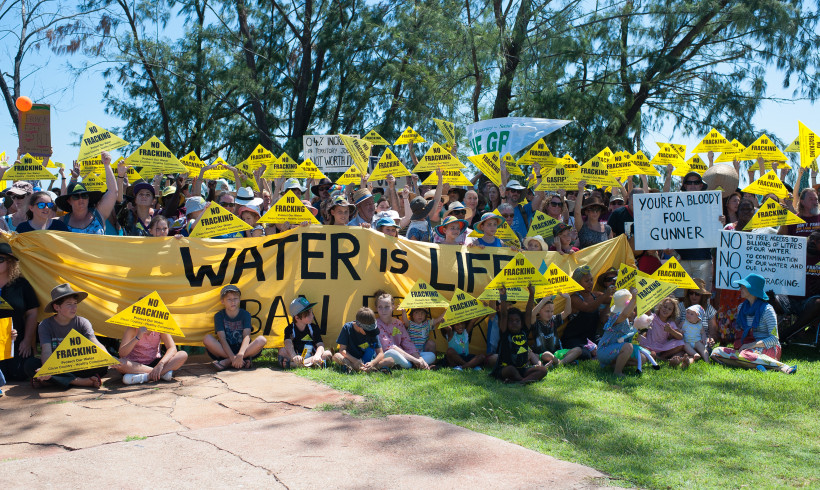 Hundreds unite in Darwin in vow to fight fracking

In an outpouring of community sentiment against fracking, over 500 hundred people gathered in Nightcliff today to take a united stand.

The hugely defiant crowd was full of families and long term Territorians, coming together off the back of more gatherings in Alice Springs and Katherine in recent days.

Dozens of statements poured in from representatives of the areas targeted for fracking that couldn’t make it to the gathering in person.

Garawa man from Borroloola Scott McDinny was in Darwin for the event and said:

“Our community has spoken loudly and clearly that we do not want fracking on our lands and through our waterways. We are already dealing with lead poisoning in our water at Borroloola. It’s a disgrace on the NT Government.

“The United Nations Declaration of Indigenous Peoples Rights states that all Indigenous peoples have the right to self-determination and autonomy, to clean water, to healthy lives.

“We demand clean water, and together with united Territorians we will ensure that fracking does not take place in our homelands or anywhere in the NT. Water is precious, water is life. We will not allow any more water to become poison.

“The Gunner Government is putting jobs on the line by failing to protect the Northern Territory’s tourism industry from the negative impacts of broad scale fracking gasfields.

“The water pollution and industrialisation of up to half the Northern Territory in fracking gasfields is completely unacceptable. We will challenge this every step of the way.

“Territory visitors and my customers are already reaching out to share their passion for keeping the Northern Territory frack-free – not 49% of the NT – but the whole of the NT protected from risky gasfields.

“We can’t afford to loose visitor numbers to a Stuart Highway clogged with thousands of fracking chemical trucks. We’re worried about our jobs and our industry,” he said.

A representative of the Aboriginal Medical Services Association NT reaffirmed their strong opposition to fracking on health grounds and expressed deep concern that it would be Aboriginal communities bearing the brunt of negative impacts.

The community gathering vowed that the coordinated effort against risky fracking was only just beginning.

“The strength and determination in the crowd today was incredible. Territorians don’t trust the Government to control such a polluting industry that has caused so much damage elsewhere.
“We reject having to spend millions of the public’s money on assisting the fracking industry get started in the Northern Territory.

“We’d rather be putting millions into investment to kick start growth and jobs in renewable energy in the NT.

Fracking has been banned in many countries of the world and in regions of North America. There are serious concerns that the NT Government and the onshore gas industry cannot be trusted to properly implement and maintain the 135 recommendations that are supposed to help regulate fracking in the decades ahead.

Chief Minister’s frack decision a betrayal of science and communities 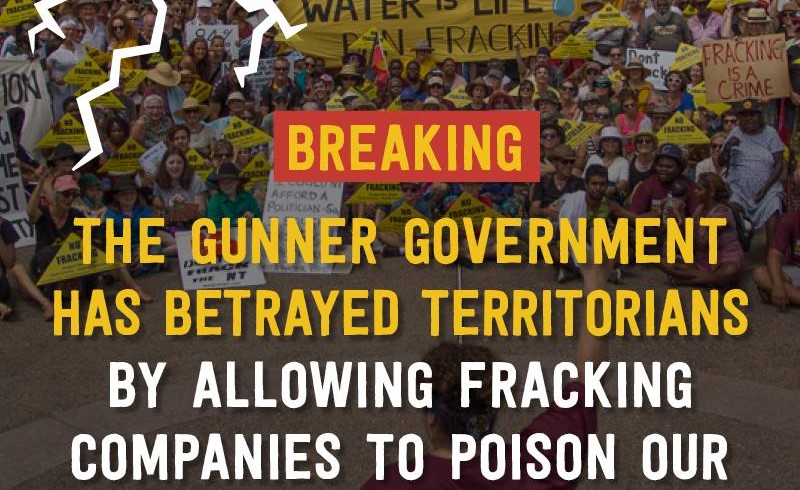 Chief Minister’s frack decision a betrayal of science and communities
Frack-free NT condemns the decision by the Gunner Government today to cave into industry pressure and expose 51% of the Northern Territory to fracking gasfields.

“This decision is a betrayal of the science on the risks of fracking, and Territory communities who have battled for years to protect our land, water and livelihoods from this highly invasive industry,” said Lauren Mellor, spokesperson for Frack-free NT.

“It is a dark day for our democracy when we have had unprecedented participation in the Inquiry into fracking, and tens of thousands of Territorians petitioning, rallying and meeting with government members to express their opposition to fracking, only to have the Gunner Government sell us out to the interests of multinational fracking companies.”

“But we will not take this decision lying down. Communities, landholders and businesses right across the NT have pledged to redouble our efforts until a Territory-wide fracking ban is in place. For us, this is just the beginning.”

Gadrian Hoosan, Borroloola Traditional Owner says: “Our people right through the region where drilling and exploration are planned have been clear – we do not want this industry risks our land, water and culture.”

“Gunner has shown he doesn’t have the courage to stand up to the fracking bullies, but we do. This decision locks our communities into ongoing conflict with the gas fracking companies, but we will not back down until there is a complete ban on fracking across the NT.”

Territory tourism operator, Rob Woods, says: “The Gunner Government has sold out our sustainable, successful tourism industry and the thousands of jobs we support on the promise of a few dollars revenue from the gas fracking industry.”

“Industrial gasfields and the heavy vehicle traffic it brings to our roads will have an immediate and detrimental impact on the Territory tourism experience, driving down visitor numbers and hurting regional economies. We won’t stand by and let this happen to our iconic tourism areas and our industry.”

Petrena Ariston, a Katherine tourism operator says: “Tourists come to the Top End to experience its pristine areas and fish our clean rivers. Yet the Gunner government has decided to risk all of this by allowing fracking in our water catchment areas that provide farm, stock and drinking water for tens of thousands of Territorians.

“I thought Gunner might be a leader with vision but instead he is repeating the mistakes of his CLP predecessor and taking us down the boom and bust road of big fracking, where companies profit and communities suffer.”