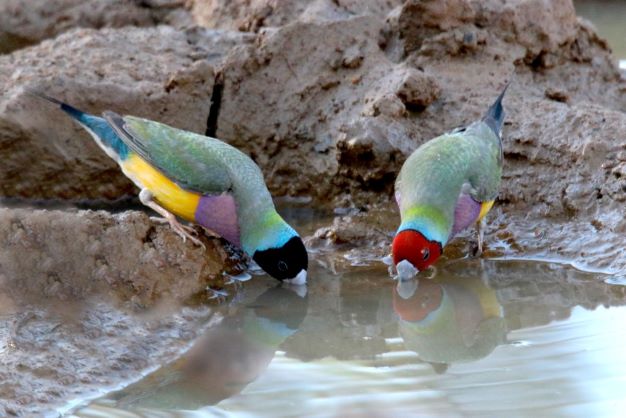 The company, through its subsidiary Imperial Oil and Gas, recently submitted what Protect Country Alliance and Birdlife Top End have described as a “lacklustre” Environmental Management Plan (EMP) that, if approved, would allow the company to frack seven gas wells in an area inhabited by endangered Gouldian Finches.

A decision on the EMP is due any day now, and BirdLife Top End’s Conservation and Advocacy Officer, Brittany Hayward-Brown, urged Minister Lawler to reject Empire Energy’s proposal, and call for a full Environmental Impact Statement to assess the impact to the Gouldian Finch, of which there have been sightings of close to the proposed development site.

“There has been so much work put into recovering Gouldian Finch populations the past couple of decades. Finally, when we are starting to see the species’ eastern populations recover, Empire Energy has put forward a fracking proposal that could potentially set populations in the NT and Queensland back by interrupting population flows from the west, and potentially impede the recovery process,” said Ms Hayward-Brown, who also completed her Honours thesis on the movement ecology of the Gouldian Finch.

“Fracking projects are not only the gas wells and flares across the landscape. Associated developments, such as new roads and pipelines – in some cases a mere stone’s throw away from consistent Gouldian Finch sightings – that will be built if the project goes ahead could also impact upon potentially important Gouldian Finch habitat.

“We are asking the Minister to request a full Environmental Impact Statement, so that she can duly consider the cumulative impacts that this development may have on endangered species like Gouldian Finches.

“Empire Energy’s environmental plan submitted to the Minister downplays the impact of the project on Gouldian Finches in the area, and as with any credible threat to endangered species, it is essential that careful surveying is performed to prevent avoidable, and potentially irreversible, damage.”

He said birdlife was particularly at risk due to Empire Energy’s plan to leave fracking wastewater tanks open and accessible to wildlife. Mr Sawyer's video footage of Gouldian Finches in the NT was also included in the David Attenborough documentary "Life in Colour" which aired overnight.

“There are a whole lot of uncertainties surrounding species in this remote region, and when this necessary work has not been completed, Empire Energy’s EMP is just bulldust,” Mr Sawyer said.

“This is typical of gas and oil companies - as this EMP shows, Empire Energy has a complete lack of regard for protecting what’s there.

“In addition to the Gouldian Finch, we know the vulnerable grey falcon lives here, and we suspect the nationally endangered Gulf Snapping Turtle and vulnerable crested shrike-tit may also be present.

“The work needs to be done to determine which species exist and in the meantime Minister Lawler needs to send Empire Energy’s EMP back to the drawing board.”

Under the Environment Protection Act, an action should be referred to the NT EPA for determination as to whether an Environmental Impact Assessment is required if it has the potential to have a significant impact on the environment.