Chief Minister; you can’t protect the environment while fracking it 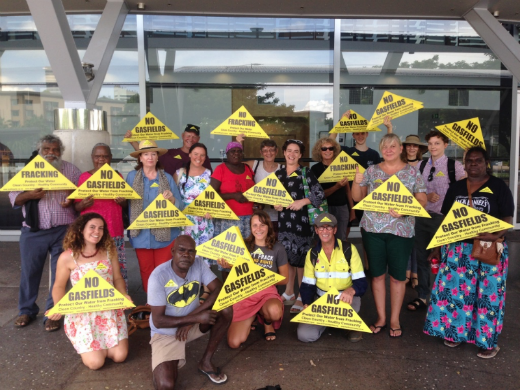 “The problem with the Chief Minister’s fracking implementation plan is that Territorians and impacted communities have rejected the fracking industry, full stop,” said Lauren Mellor, spokesperson for Frack-free NT.

“Territorians don’t want empty promises to mitigate fracking risks. The Gunner Government has a responsibility to protect our land, water and human health by eliminating these risks through a permanent ban on dangerous fracking.”

“Gunner’s fracking implementation plan paves the way for gasfield production, while critical groundwater, health and biodiversity studies have not yet been completed and while communities are being denied a meaningful role in local decision making.”

“The fracking inquiry found that the Territorians from proposed gasfield zones are overwhelmingly opposed to fracking. Trust in the Gunner Government is completely broken because they’re implementing this plan against the wishes of impacted landholders and communities.”

Borroloola elder Nancy McDinny responded to the plan by saying, “If the Chief Minister is so confident his government can manage fracking and protect the environment, why doesn’t he come and visit us in Borroloola where we are dealing with contamination from another government-backed mining project that has failed our community miserably?

“Our community is living proof that the government puts mining profits ahead of people. We don’t trust them to regulate fracking. We will fight for a total ban in our region.”

Miliwanga Wurrben, elder from Central Arnhem Land said, “Our governments knew about the risks of PFAS contaminants since the 1980s but kept this information secret from Territorians.

“The risks of fracking to our water have been well documented. Why is the Chief Minister exposing our people and environment to more problems by pushing the fracking industry, when they can’t even manage the current contamination problems?”

Daniel Tapp, owner of Big River Station near Mataranka said, “The science and lived experience shows you can’t protect the environment and frack it at the same time. The Territory Government has racked up a high failure rate so far on its exploration wells. The NT Fracking Inquiry found Territorians rejected the industry and the government’s capacity to regulate.

“By pushing fracking on unwilling communities, the Chief Minister has lost all trust, and no amount of government spin can hide that fact.”